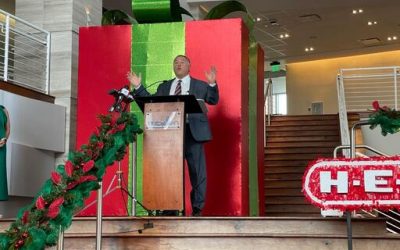 Earlier today, the City of McAllen announced that the 2021 presentation of the McAllen Holiday Parade, presented by H-E-B and powered by Bert Ogden & Fiesta Dealerships, will return to a live, in-person presentation this year, on Saturday, December 4, 2021. The parade will step off at 6 p.m. from the McAllen Veterans Memorial Stadium, 2001 N. Bicentennial Blvd., and will head out on the 1.5-mile parade route, where spectators can gather and enjoy the sights and sounds of the entire parade.

“We invite the entire Rio Grande Valley to come to McAllen and enjoy and experience the largest illuminated holiday and helium balloon parade in Texas,” said McAllen Mayor Javier Villalobos. “I am also proud to announce H-E-B will continue to be the presenting sponsor of the McAllen Holiday Parade for the next three years.”

“H-E-B is proud to continue as presenting sponsor for the McAllen Holiday Parade as this exclusive partnership is our way of saying thank you to the community for their continued support of H-E-B throughout the Rio Grande Valley,” said Tony Gonzalez, Director of Merchandising and Marketing for the border region for H-E-B. “The McAllen Holiday Parade brings smiles to the faces of the young and young at heart and all of us who are involved with this parade, from the sponsors and media partners and to the organizers, it is a collaboration of joy and excitement as it represents all of our commitment to this community, to the state of Texas and beyond.”

A sponsor of the parade since its inception eight years ago, Bert Ogden & Fiesta Dealerships provide all the vehicles that pull over the over 50 animated floats featured in the parade. “On behalf of Bob and Janet Vackar and myself, I’m so happy we are celebrating Christmas in July 2021 as we begin to prepare for the McAllen Holiday Parade, presented by H-E-B! Bert Ogden Auto Dealerships are very proud to once again ‘pull’ through for our eighth annual international award-winning McAllen Holiday Parade,” said Marsha Green, Vice-President of Marketing, Bert Ogden & Fiesta Dealerships.

According to McAllen City Manager Roel “Roy” Rodriguez, the success of the McAllen Holiday Parade is due to the creativity, innovation and passion of the countless City of McAllen employees involved with the project and the amazing partnership cultivated with the sponsors and partners. “We are proud of the work we do for the community and we are proud to have such partners and sponsors who share in bringing these events to life and we are especially proud to be celebrating Christmas, the most wonderful time of the year, here together in McAllen, the Official South Pole of Texas.”

McAllen Holiday Parade producers will bring back many of the same elements that have made the parade a huge success, including the illuminated, animated floats; giant helium Macy’s-style balloons; top marching bands; celebrity appearances and guests hosts; and the Rio Grande Valley unique flavor, the fan-favorite vuelta in designated zones along the parade route. Coming back again this year is the McAllen Holiday Parade sweepstakes before and during the parade, where fans can watch and win fabulous prizes. Also making a return is the free, family-friend Christmas in the Park festival and carnival.

For all of the latest information and updates on the McAllen Holiday Parade, follow them and the City of McAllen on social media and all of its streaming platforms.

In 2020, the McAllen Holiday Parade, presented by H-E-B, celebrated front-line heroes and was broadcast in Spanish across 83 U.S. Hispanic markets and in English in 13 Texas markets.