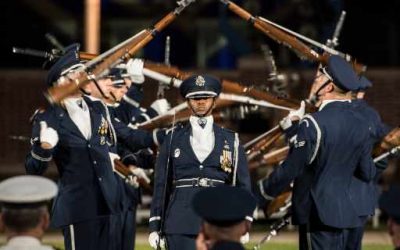 The City of McAllen announced the lead step-off band for this year’s McAllen Holiday Parade, presented by H-E-B and powered by Bert Ogden Fiesta Dealerships, will once again be the U.S. Air Force Parade Element Honor Guard and Drill Team, the premier U.S. military marching and drill team element, adding precision from a unit that performs in parades and celebrations around the world. Also returning to serve as celebrity hosts are popular television personalities, producers, actors and two-time MHP veteran Mario Lopez and Julián Gil.

A lead step-off sets the tone of the parade and creates excitement for the rest of the floats and bands as they march down the parade route,ˮ said McAllen Mayor Javier Villalobos. “I believe this lead step-off band will do that and more, as they help to highlight our veterans and current serving military and inspire the youth in McAllen, the Rio Grande Valley and South Texas and everywhere else the parade is broadcast.ˮ

This is the second time that the U.S. Air Force Parade Element Honor Guard Drill Team has performed in the McAllen Holiday Parade, first appearing in 2018, to a standing ovation from the 13,000-plus stadium crowd, after performing a one-minute drill routine before continuing their trek along 1.5-mile parade route out of the stadium, down Bicentennial Blvd towards U.S. Business 83. Organizers expect the same reaction from spectators and viewers watching the unit perform in the four-time awarded Best Parade in Texas and Best Parade in the World. Aside from the parade presentation, the U.S. Air Force Honor Guard will also be coordinating school visits in the community in the week leading up to the parade, hoping to recruit future airmen and airwomen to their ranks. Anyone interested should contact the City of McAllen at (956) 681-1001 or via email at kmartinez@mcallen.net.

Lopez has appeared on several television series, in films, and on Broadway. He is best known for his portrayal of A.C. Slater on “Saved By the Bell” and is well known for hosting the syndicated entertainment news magazine show “Extra”, “America’s Best Dance Crew” for MTV, the American version of “The X Factor”, and “On with Mario Lopez” a four-hour music program featuring a unique blend of entertainment stories and celebrity interviews. Most recently, Mario hosted the live stream for the 2020 Macy’s Thanksgiving Day Parade, as well as the 2020 McAllen Holiday Parade live stream.

Gil is an actor of both TV and film, television host, TV, film and musical event producer, philanthropist, and businessman without borders,with more than 30 years in the entertainment industry. Gil considers himself Puerto Rican at heart, but has worked throughout Mexico, Latin America and even the United States.

he parade will step off at 6 p.m. on Saturday, December 4, 2021 from the McAllen Veterans Memorial Stadium, 2001 N. Bicentennial Blvd. and anyone wanting to watch the U.S. Air Force in stadium can buy tickets for the parade at ticketmaster.com or at the McAllen Convention Center Box Office, starting this Friday, August 27 at 10 a.m. Ticket prices start at $10, plus service fees.

For parade organizers, the return to McAllen Veterans Memorial Stadium is a homecoming for the McAllen Holiday Parade, as it first debuted in the stadium just eight years ago and is truly, the best seat in the house to enjoy the colors, design, animation, sound and experience of the floats, balloons and of course, the award-winning McAllen I.S.D. school marching bands, as well as the Air Force Honor Guard and countless celebrities who are all a part of what make the parade so unique and such a great experience to watch.

McAllen I.S.D. has enjoyed a great relationship with the City of McAllen to put together these parades for our community for the past eight years. It is a fantastic event that allows us to showcase many of our hard-working students representing our excellent programs and schools,” said Dr. J. A. Gonzalez, McAllen I.S.D. Superintendent.

Echoing the superintendent’s comments were McAllen I.S.D. School Board President Sam Saldivar, Jr., who said,&nbsp;“Events like this have a way of bringing communities together in a manner that is fun, creative, and energetic. It is a great experience for our participating students and provides memories for a lifetime for families who get to watch it unfold.”

The McAllen Holiday Parade, presented by H-E-B , is the largest illuminated and helium balloon holiday parade in Texas and uses 15 miles of rope light, which generates 1,875,000 lumens of light to properly illuminate the parade and 44,500 cubic feet of helium to keep those giant balloons afloat and is powered by 12,000 horsepower by over 50 trucks from Bert Ogden Fiesta Dealerships.